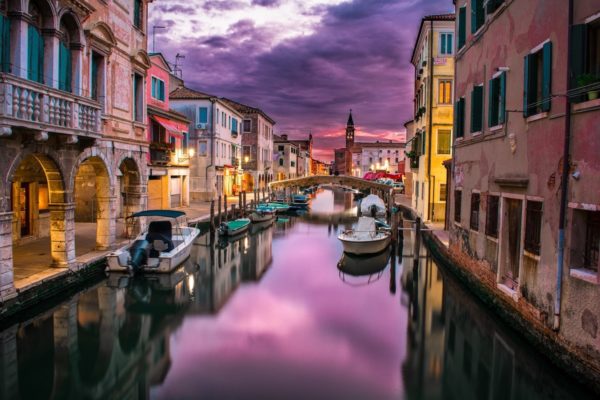 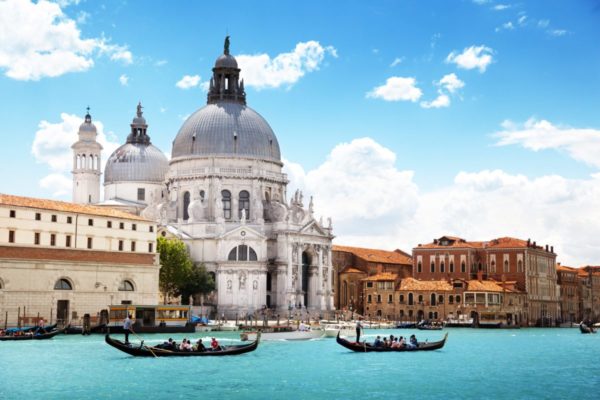 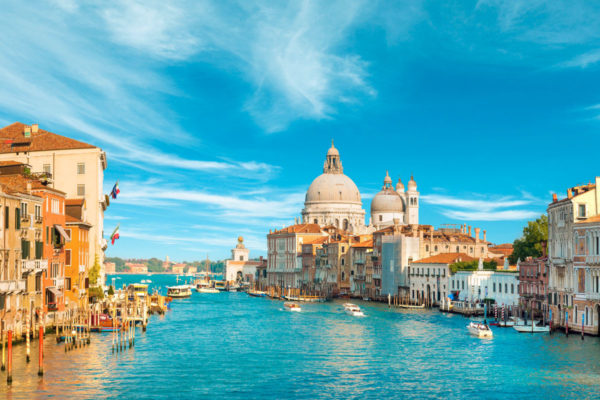 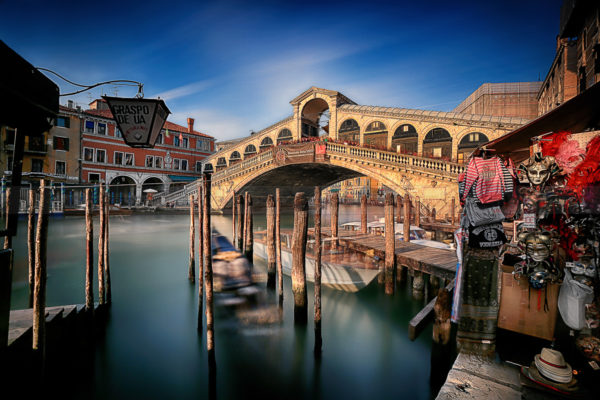 Venice is made up of 120 islands located on a large lagoon, between the mainland and the sea. Originally the territory of Venice was occupied by stilt houses and inhabited by Illyrian and Venetian populations, who lived on fishing and salt extraction. The Venetians, expelled by the Ostrogoths and the Longobards, took refuge in the marshes of the Po river mouth and founded Venice. The privileged position, between marshes and stagnant waters, protected Venice from possible conquests. In 810 the son of Charlemagne was forced to order the retreat of his ships, failing to navigate in swampy areas. In 829, from Alexandria came the body of the apostle Mark, the evangelist who will become the patron of the Serenissima. In 976, a fire destroyed the historic center of Venice, including the Palazzo Ducale, the city archives and the original Church of San Marco. The fruitful relationship with Bisanzio guaranteed the development of maritime and commercial traffic in Venice. In Bisanzio the Venetian ambassador had, in fact, exclusive privileges. Trade relations with Muslims proliferated over the years, even after the prohibitions decreed by the Lateran Council (1261). With the silk and spice trade of Constantinople (ancient Byzantium) and Alexandria, the Serenissima saw its economic power increase considerably, thanks to the transport of fish, textiles, wood and iron (extracted from the Alps). One of the most productive commercial activities for the economy of the Venetians was the sale in the North of Africa of slaves, bought in the south of Russia, and human traffic from Alexandria and Turkey. In 1204, with the Fourth Crusade, what we can consider the golden age of Venice began. The Venetian galleons, led by the Doge Enrico Dandolo, conquered Constantinople and the Greek empire was divided by Venetians and allies. These occupied the many commercial districts of the cities of Syria, Palestine, Crete and Cyprus. Venice reached its apogee at the time of Marco Polo, one of the most famous Venetians in history. In Venice he established the Republic, a form of government that did not exist in the other city-states of the Italian peninsula. From the early years the organization of the Republic of Venice endeavored to avoid that one man, the Doge, possessed a totalitarian power. In fact, the patriarchs did not want to be governed by a member of their community, especially when they did not bring any benefits to their own economic interests. In 1148, the “Ducal Promise” was instituted for the Doge, which was to be accepted when the office was conferred. In 1410, Venice controlled a large part of the current Veneto and cities of the caliber of Verona and Padua, later occupying also the Lombards Brescia and Bergamo. The Adriatic became the “Venetian sea”, whose power extended to more distant places, such as Cyprus. In the fifteenth century, Venice was the center of world trade and the largest port city in the world, with more than 200,000 inhabitants. His palaces became more luxurious every day, decorated by artists such as Veronese and Giorgione. It was at this time that Venice reached its maximum splendor! If the conquest of Constantinople was the beginning of its apogee, its loss, in 1453, at the hands of the Turks, began a galloping decline. To this was added the discovery of America, which geopolitically transferred international commercial interests. The plague of 1630 struck a third of the population of the Serenissima. The decline of Venice was now evident and the Habsburgs strengthened the Trieste Port by undermining Venetian interests. With the Conspiracy of Venice, Naples also tried to conquer the Serenissima. In the eighteenth century Venice, by now a specter of what it had been in the past, tried to recover its ancient prestige with the conquest of Tunis. But soon, with the French Revolution, the French and the Austrians, the Venetian territory was disputed.

Visit Venice in one day: mission impossible? Having such a high density of works of art, museums and enchanted corners is really hard to choose where to go and what to enjoy in Venice. With our official and authorized guides, however, you can have at least a few hours an orientation of the major works of art of the city and walking with them through the enchanting corners of the Venetian keep a memory of a tour that will be impossible to erase from your memory.

There are two ways to visit Venice: follow the flow of hasty tourists who in a few hours follow a fixed route chosen by about 20 million people every year, or leave this path and try to discover a less postcard-like Venice. We think that you can do both: get to Piazza San Marco, enjoy the joy of being there, in that place seen so many times in photography, or get on the Rialto Bridge to admire the Grand Canal and fight with the crowd to be able to take a souvenir photo. But also to get out of the common place on Venice to discover that there are extraordinary places even in a city that in itself is out of every ordinary. And this can only be done by entering the buildings, not merely observing the facades. It thus happens to enter the Gallerie dell’Accademia, the Scuola Grande di San Rocco or the Chiesa dei Frari and discover magnificent works and very fine architectures, which tell the true story of Venice, that too often obscured by postcard-like tourism.

Piazza San Marco is the first place that comes to mind when talking about Venice. The large square on which stands the Basilica, with pigeons waiting for some crumbs, is perhaps the most famous image of Venice. Before the arrival of the relics of San Marco and the consequent construction of the Basilica, this area was simply a large vegetable garden, crossed by the river Batario, then buried by the will of Vitale II Dog. Michiel Piazza San Marco is the only wide space in Venice which has the privilege of being called “square”, while all the other areas with this characteristic are called “fields”. In the years of the Serenissima Republic hosted fairs, tournaments, procession, and the hunting of bulls, while today is surrounded by bars (very) expensive, where you can sit and watch live to the passage of tourists from around the world enraptured with such beauty .

Palazzo Ducale was exactly where it is now during the period of the Republic, has overcome successive dominations and was still standing when Venice was annexed to the Italian State. Constant and faithful presence of the city of Venice, the style of the Palazzo Ducale has undergone many changes, dictated by the long series of terrible fires that have led to significant changes over the years. The political importance of the Palace, which welcomed the Doges of the history of the Republic of Venice, was also underlined by Napoleon Bonaparte when, in 1797 he made it the center of his administration, after having conquered the city. The historical importance of the Palazzo Ducale di Venezia is also evidenced by the huge sum paid by the coffers of the newborn Italian State, in favor of a total renovation of the building. Despite the heavily passive balance of unified Italy, which had borne the debts of all the states merged under the tricolor, no expense was spared to give one of the most important symbols of Venice, a new garment.

The Venetians call it Canalazzo but it is not a derogatory name, it is only their way of identifying the Grand Canal. The Grand Canal crosses Venice for 4 kilometers, dividing the historical center of the city in two parts. Far more ancient than the city itself, the Canal has a S shape on the contrary and in some places it reaches even 5 meters of depth. Its width varies according to the areas of the city, there are places where it is 70 meters wide. If you want to observe and admire the city from a different point of view, take part in the tour on the Grand Canal, which starts from the Santa Lucia railway station to Piazza San Marco for a wonderful scenery. The palaces overlooking the Grand Canal are all facing the river, and during the tour they seem to make races to capture the attention of tourists. Observing the beauty of the buildings, the harmony of the buildings and the narrow alleys that can be glimpsed as the boat slowly proceeds towards Piazza San Marco, you can understand why Venice has always been one of the most loved cities in the world.

It is not easy to count them one by one, because the bridges of Venice are 354! The lagoon city has a morbid relationship with its bridges because it desperately needs to connect different areas to each other and make travel a little easier. The Venetians have been able to transform a need into a distinctive note of the city: Venice is characteristic for all these “half moons” that meet along the canals. The most famous, perhaps, is that of “Sighs”, but not everyone knows that its name does not derive from the languid sighs of lovers who pass under it, swearing eternal love. It seems that the sighs that give the bridge its name, are those of the condemned who were taken to the nearby prisons and, looking for the last time the city, let themselves be assailed by despair. That of the “sighs” competes for fame with the Ponte di Rialto, which is a beautiful show of itself on the Grand Canal. In 1593 the Rialto Bridge replaced the ancient bridge made with wooden boats that allowed the passage to the busy market the Rialto. Today the bridge, covered by arches, is crowded with tourists and sellers, one of the most famous photographic points in the world. The most recent bridge in Venice, the spectacular Constitution Bridge, was designed and built by the great Spanish architect Santiago Calatrava. The Bridge, commissioned in 1997, after an elephant gestation due to design errors and doubts about its stability, was opened to the public in 2008 and only a year later, it had the final technical approval.

The Gallerie dell’Accademia houses the richest collection of Venetian and Venetian paintings, from the 14th century byzantine and gothic to Renaissance artists. Some names can immediately clarify the quantity and quality of the works housed in a complex that unites the church of Santa Maria della Carità, the convent of the Lateran Canons and the Great School of Santa Maria della Carità: Bellini, Carpaccio, Giorgione, Veronese, Tintoretto and Tiziano, Tiepolo and the great eighteenth century vedutists Canaletto, Guardi, Bellotto, Longhi. Then there are works by Mantegna, one by Piero della Francesco, Crivelli, Luca Giordano, Memling and others. In the museum, one of the highlights of Leonardo da Vinci, the Vitruvian Man, is also housed, but it is rarely exposed because the light would discolour the ink.

Be the first to review “Tour of Venezia” Cancel reply