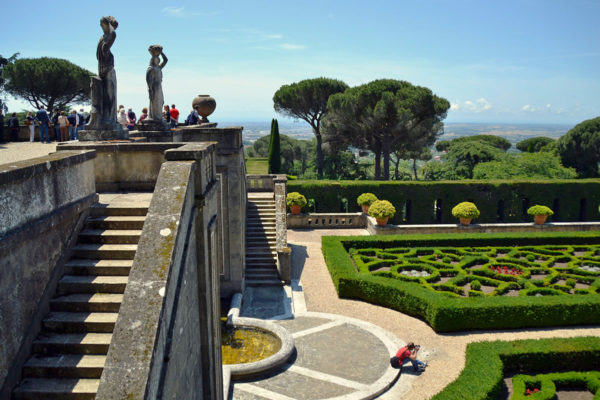 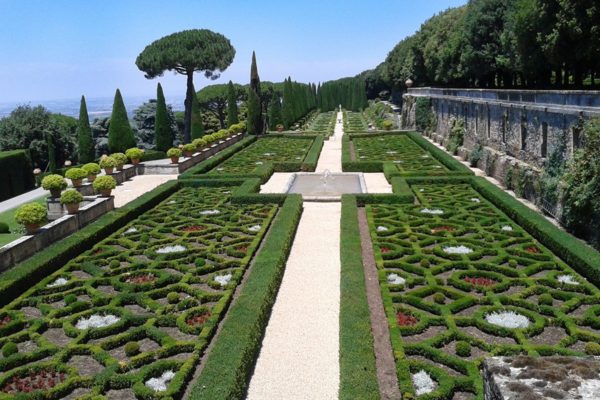 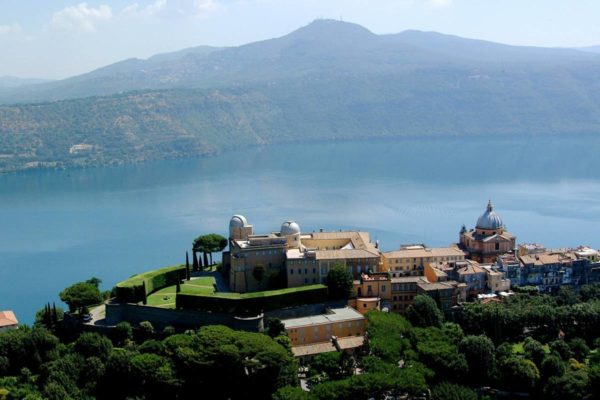 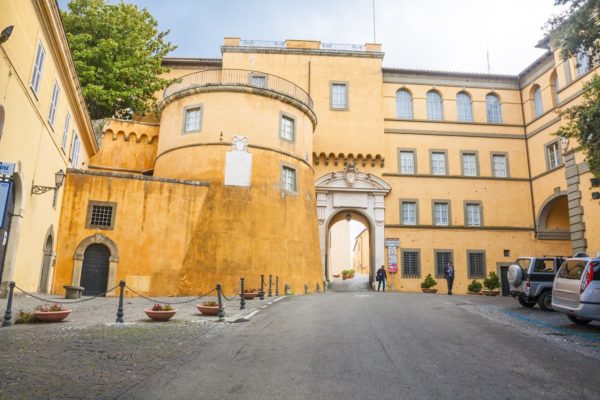 In a gorgeous position overlooking Lake Albano, Castle Gandolfo is situated on the boundary of a volcanic crater. The town is known for the beauty of the surrounding nature and its elegant historical center inclosed by the wall. It has been elected one of the most beautiful villages in Italy. Above all, the small town is famous for the Papal  Palace where Popes have spent their summers holidays since the 17th century. After all, Castel Gandolfo and the nearby towns were favourite places to build summer residences since the ancient Roman times, initially by patrician families and emperors and later by important ecclesiastics and noble Romans. Evidence of ancient Roman times are the remains of the Villa of Domiziano to which the Ninfeo Bergantino belongs. The villas and other residences surviving today such as the Chiesa di San Tommaso Villanova were mostly built at the beginning 17th century when Castel Gandolfo became property of the Holy See. Its history is very ancient as its origins go back to the town of Alba Longa.

The tour starts at your address that can be Hotel, apartment, Cruise ship or airport terminal. The time can be flexible but we always suggest to leave around 8:00/8:30. The tour will be chauffeured by a professional driver guide English speaking that will give you all the most important information about the sights that you will see but is not anyway allowed to leave the car and follow you inside the monuments. The vehicle is a comfortable recent registration minivan that cannot take more than eight passengers. Tours will be a memorable tour with your small group far from the busy group bus tours.

The beautiful Roman villa built between 81 and 96 AD by Emperor Titus Flavius Domitian and dating back to the Roman age it was a huge residential complex that developed over three rooms of about 1500 square meters. Today its monumental remains, placed more within the extra-territorial Villa Barberini, make it one of the most interesting archaeological sites of the Lazio region.

In 1661 the square overlooked by the Pontifical Palace was embellished by another Bernini masterpiece: the Fountain. The drawing, inspired by the plan of S. Pietro, is similar to that of the fountain of S. Andrea della Valle in Rome.   On the east side of piazza della Libertà, the road opens up to the belvedere on Lake Albano. Always on this side rises the superb bulk of the Church of San Tommaso di Villanova, one of the most beautiful works of Bernini. It has a Greek cross plan with a thin dome resting on Doric style pillars. On the high altar the painting of the Crucifixion is by Pietro da Cortona. The facade is punctuated by pilasters, a thick frame and a triangular pediment with the arms of Pope Alexander VII at the center.

A few meters ahead, on the right of the street, is the Ninfeo Bergantino, also called Bagni di Diana for a mosaic depicting the goddess . The nymphaeum occupies the space of a large cave excavated in earlier times. Traces of paintings have been found on the walls but certainly there were also marble decorations. During the excavations of 1841 fragments of sculptures came to light. Continuing along Via dei Pescatori you will soon reach the point where the emissary of the Albano lake is located: the tunnel of almost one and a half kilometers has been opened and excavated by the Romans in blocks of tufa and begins with a monumental chamber.

2 reviews for Tour to Castel Gandolfo