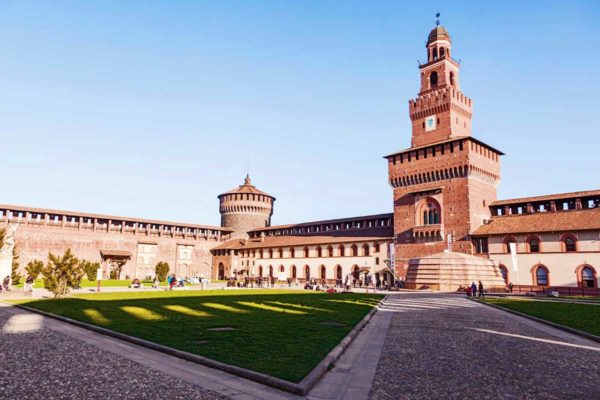 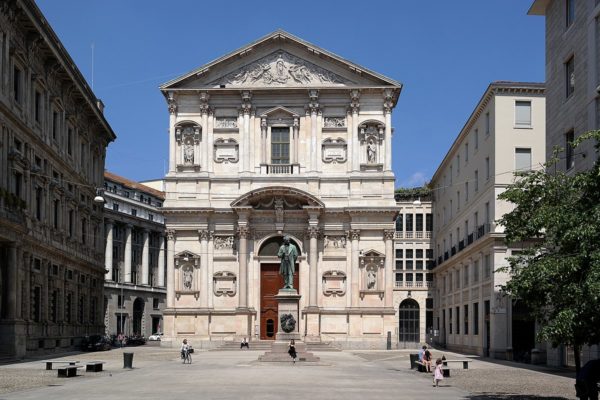 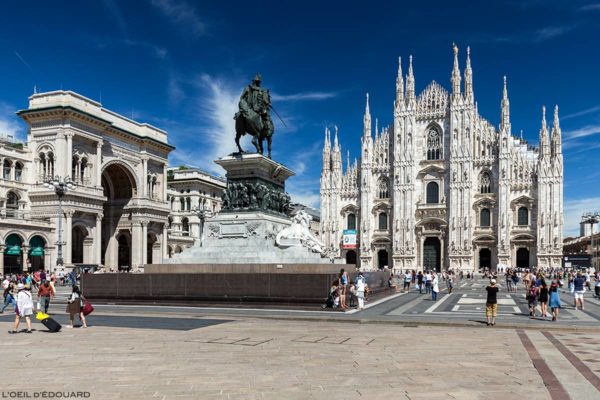 Milan was founded by the Insubri Gauls at the beginning of the 4th century BC, it became Mediolanum under Roman rule from the 3rd century BC “Mediolanum” is the Latin form of a Celtic name that seems to mean “middle place” Conquered by the Roman legions in 222 BC, Mediolanum tried to rebel, allying itself a few years later with Carthage, Rome’s enemy. But the Romans won, and at the end of the first century AD Milan became an integral part of the Roman dominions. From the Roman era, few traces remain in the city, such as the Colonne di San Lorenzo, in Via Circo, under the Stock Exchange, at the Monastero Maggiore. With the administrative subdivision of the Roman Empire, Milan became the capital of its western part (292), and was a center of great importance for the Christian religion, as attested by the many Milanese churches such as Sant’Ambrogio, Sant’Eustorgio and San Lorenzo of origin. Early Christian. Among the factors that led to the fall of the Roman Empire are the invasions of the barbarians from the North. Milan was sacked in 539 and lost its role as the most important city in the region. The Roman-barbarian kingdom (569-774) of the Lombards (from which Lombardy takes its name) had its own capital Pavia, 20 kilometers south of Milan. Around the year 1000, Milan was already the most populated city in Italy and was known for its production of wool, silk, metals and weapons. Between the eleventh and thirteenth centuries Milan became a free municipality then subjected by Federico Barbarossa who wanted restore the Empire. In the fourteenth century the Lordship of the Visconti won the dominion over Milan and subsequently passed to the Sforza. It then became the capital of the Duchy of Milan, consolidating its historical importance. At the end of the 14th century the French king Louis XII conquered the duchy and in the middle of the century the French were replaced by the Spaniards who ruled over Milan until the beginning of the XIIIth century. Then came the Austrians who dominated (except for the Napoleonic period) until the “Five days of Milan” of 1848 that saw the expulsion of the Austrians. In 1859 Milan became part of the domains of the House of Savoy, and from 1861 of the Kingdom of Italy. In 1919 it was in Milan that the Fascist movement was founded, which saw few opponents but groups of intellectuals and workers. Testimonials of fascism in Milan can be seen in the Central Station of Milan, in the Palazzo di Giustizia and in the Triennale di Milano. Milan suffered considerable damage from the bombings of the Second World War: many monuments and some completely destroyed were damaged. The economic and commercial development began in 1946, bringing Milan to be the fulcrum of the financial and economic activity of Italy.

Milan, the capital of the homonymous metropolitan city and the Lombardy region, is the main Italian financial center and is one of the international fashion capitals. The city is certainly worth seeing as it offers many interesting facilities both on a historical and cultural level, also Milan is also very famous for its many opportunities for recreation. Milan is a city of culture as can be witnessed by the many cultural buildings, such as the Pinacoteca di Brera which houses an important collection of works by Italian and foreign painters from the 1400s to the 1700s: a real and its cultural heritage throughout Italy. The beautiful Castello Sforzesco houses many museums of all kinds: historical, artistic, photographic, musical and more. Also worth seeing are the Museo del Cenacolo Vinciano, which houses the work of the Last Supper by Leonardo da Vinci, and the Museo del Novecento, perfect for those who love painting of the century, especially Futurism. Another cultural building is the famous Teatro della Scala, founded in 1776 and today a temple of world classical music; it has hosted opera singers and the greatest musicians.

Milan is commonly known as the economic capital of Italy, a definition that seems to emphasize that they turn a lot of money but there is little interesting to see. And instead of things to do and see in Milan there are many: you can start from the Milan Postcard, that of Piazza Duomo, the Galleria Vittorio Emanuele II and the Castello Sforzesco, symbols of the ancient wealth of Milan. Then there is the Milan of Leonardo Da Vinci, who put his architect genius at work to make navigable ships, recently recovered and fashionable place. Leonardo also donated one of his greatest masterpieces to Milan: the Cenacolo, painted in the refectory of Santa Maria delle Grazie. Then there is the international Milan, the one that attracts riches from all over the world: that of San Babila with its beautiful neo-Romanesque church, but above all with the fashion streets, the windows of the big brands, the models around and the parked cars. In short, the things to do and see in this city are not few, to which we must add the charm of a great European metropolis and a kitchen unjustly undervalued compared to that of Rome, Naples or Florence.

What could be more representative of Milan than the Duomo? The church dedicated to Santa Maria Nascente, built at the behest of Gian Galeazzo Visconti, is the symbol of the city, as well as one of the first things to see as soon as you set foot in Milan. The works for the Milan Cathedral began in 1386 and favored the birth of a stupendous monument, with wonderful windows and beautiful sculpted decorations. This majestic structure is the most significant testimony of Gothic architecture, which leaves no room for any doubt: it is the only one in which Nordic characters and Lombard elements merge. The beauty of the Duomo is completed by the main spire dominated by the famous Madonnina, a golden copper statue, 4 meters high. If you visit the church on a beautiful sunny day, you can enjoy from the terraces a wonderful view of the city and the Alps. Inside you should not miss the presbytery area, set up again in the second half of the 500. At the apex of the apse. the relic of the Sacred Chiodo della Croce is located. Just to give a little ‘numbers know that: in the Cathedral there are 3,500 statues, including the 96 giants of gargoyles, and that the structure is 157 meters long, 92 meters wide and that the spire is 108.50 meters high.

The Last Supper by Leonardo da Vinci is jealously guarded inside the refectory of the Dominican convent of Santa Maria delle Grazie in Milan. Leonardo created this work of surprising beauty on the north wall of the great hall between 1494 and 1498, during the lordship of Ludovico il Moro. The brilliant Leonardo executed this “dry” masterpiece, instead of the fresco technique usually used for wall paintings. Unfortunately, over time, due to environmental conditions and historical events, the work has undergone heavy deterioration and can be seen only partially. Many have been the restoration works on the Last Supper, and in particular that of 1999 has returned to the painting its original colors and has removed the previous works of painting. To avoid that the painting can still be damaged, it is kept in particular environmental conditions, determined by the treatment of the air, and can be visited only by groups of maximum 25 visitors at a time, every 15 minutes.

When Milan was proclaimed capital of the Italic Kingdom by Napoleon, the expropriated paintings of churches and aristocrats (those not brought to Paris) arrived in Brera. Therefore, the Pinacoteca di Brera differs from the other prestigious Italian museums because it does not originate from the private collections of the aristocracy and the princes, but from that of the State and the political. The collection is very rich with some of the most famous works in the world: from the Dinner in Emmaus by Caravaggio to the Dead Christ by Mantegna, from the Pala Brera by Piero della Francesca to the Sposalizio della Vergine by Raffaello. Alongside these famous works there are many others, exceptional even if less known. One of the symbols of Brera is the framework of Romanticism par excellence: the Kiss of Hayez. The collection dates back to the 20th century with works by Braque, Modigliani, Picasso, Morandi, De Chirico and many others.

You almost never think of Milan as a city of water, but it is so. The Navigli system was born with the ambitious project of connecting Milan with Lake Como, the Adda, the Lago Maggiore and the Po, arriving in northern Europe and then up to the sea. The history of the Navigli begins in the second half of the twelfth century, with the construction of the first navigable stretch. The first canal, the Ticinello, was inaugurated in 1179, and with its 50 kilometers in length, it gave way to the construction of the great Naviglio. In 1457 Francesco Sforza entrusted Bertola da Novate with the construction of the Naviglio della Martesana but it was with Ludovico il Moro that the true turning point took place. And what genius could complete such a complex hydraulic work if not Leonardo Da Vinci? With a brilliant system of locks, Leonardo da Vinci managed to connect Milan with Lake Como. Only the connection with the sea was lacking through the Po: Napoleon thought in 1805 that he completed the construction of the Naviglio Pavese. The Navigli have lived different times: they brought wealth but then they suffered abandonment and pollution, a good part were buried. Despite everything, the Milanese have always loved them, going for a walk or going to the taverns and clubs that were born around it. Today they live a rebirth and are at the center of numerous redevelopment projects: the first brought to completion is that of the new Darsena, in the Naviglio Grande, which took place with the Expo 2015. Cycle paths, boats, relaxation areas flank the traditional taverns, boutiques and artists’ shops.

The Castello Sforzesco has accompanied the history of Milan for 750 years and has been a determining place on many occasions. The first construction was commissioned by Galeazzo II but it was Francesco Sforza (hence the name), to give it its current form. The Castle has almost always played the role of a military citadel and is, still today, one of the largest castles in Europe. Always a place linked to war, domination and mourning, then loved and hated by the Milanese, in the twentieth century the castle changed its face and took on the comforting aspect of a place of culture, used to protect the testimonies of Lombard art. Currently the Castello Sforzesco is full of museums: on the ground floor of the Corte Ducale there is the Museum of Ancient Art, on the first floor the collection of furniture and the Art Gallery, on the first and second floor of the Rocchetta there are the Art collections Applied and the Museum of Musical Instruments, in the basement of the Ducal Court there are the Museum of Prehistory and Protohistory and the Egyptian Museum. The Castle contains some masterpieces of Italian art: Michelangelo’s Pietà Rondanini, Leonardo’s frescoes in the VIII hall of the Museum of Ancient Art, the Madonna in glory and saints Giovanni Battista, Gregorio Magno, Benedetto and Gerolamo del Mantegna in the Pinacoteca the extraordinary series of tapestries depicting the twelve months of Bramantino, in the Sala della Balla.

Be the first to review “Tour of Milano” Cancel reply