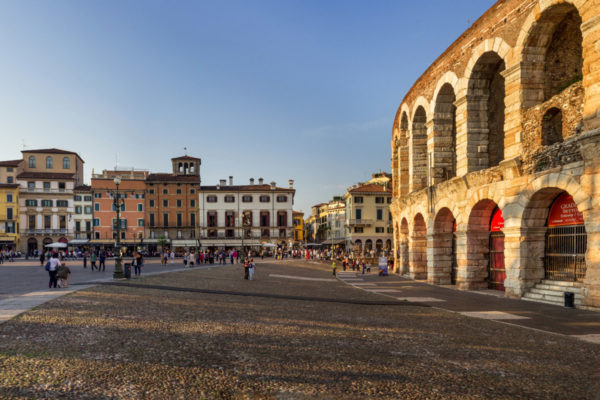 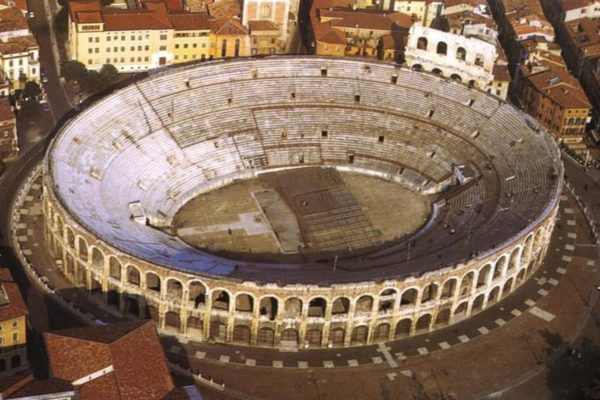 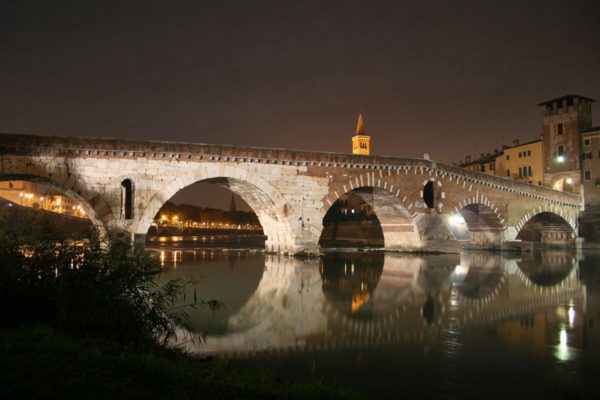 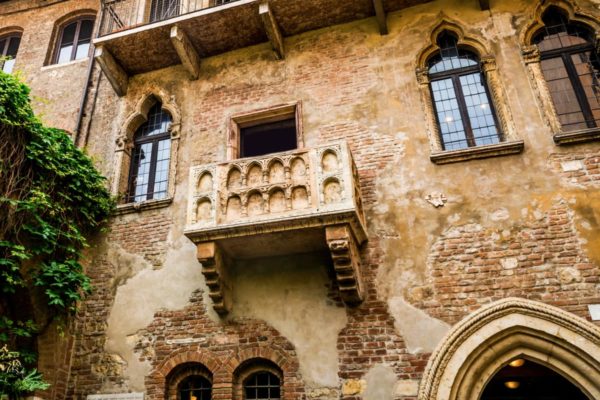 In a tongue of land drawn by the loops of the river Adige rises Verona, a beautiful city registered in the UNESCO world heritage list. Two thousand years of history enclosed in just over 200 square kilometers, this, in short, Verona: a place where harmoniously integrating artistic elements of the highest quality belonging to different historical periods. Founded in the first century BC, thanks to its geographical location, in Roman times it was an urban center of which still today there are magnificent traces, from the Arena to the Roman Theater, from the Arco dei Gavi to Porta Borsari, to the archaeological area of Porta Leoni. Invaded and occupied for a long time by the barbarians, the city experienced its period of maximum splendor under the Scaliger dynasty (XIII – XIV century). There is also the Verona of the era of the Municipalities, the Verona of the French domination and that of the Austrian domination, and then the Italian one of the Risorgimento, naturally. Many faces of this city, whose history is a bit ‘the summary of the history of Italy, as evidenced by the works of Roman times, medieval streets and Renaissance palaces. The hub of commerce is piazza delle Erbe, which rises in the place where the Romans founded the Forum.
This square represents the synthesis of various historical moments, as evidenced by its fourteenth-century palaces, including the Casa dei Mercanti, the painted facades of the Mazzanti Houses and the fountain of Madonna Verona with the central statue of the Roman era. The Roman period dates back to the symbol of the city, the Arena (I century AD), built to accommodate the fights between the gladiators, after a period of neglect returned to host theatrical performances and, from 1913, with the first edition of ‘Aida, it was confirmed stage of the world lyric. The ancient Roman theater, however, is on the other side of the river Adige, built on the side of a hill; and also the Porta dei Borsari, ancient access to the city.
The Romanesque Verona is that of the imposing cathedral and the cathedral of San Zeno, while Castelvecchio, overlooking the bank of the Adige, is the symbol of the medieval power of the Scaligeri, to whom we owe the construction of the massive crenellated bridge, the Scaliger bridge . Built in the mid-1300s, Castelvecchio was the home of Cangrande della Scala and today is home to the Civic Art Museum. In Verona the buildings tell stories of wealth and power.
In Piazza dei Signori, dominated by the Lamberti tower, stands the arcade of the council loggia, where political life took place in the sixteenth century, while the palace of Cansignorio and the Palazzo del Comune (or della Ragione) were the seat of military power and judiciary and administrative.

Verona is the city of love, of that troubled love lived by Romeo and Juliet. Of that imperturbable love lived by Catullus, a Latin poet, to whom Verona was the birthplace. And love, inscrutably, is still alive in Verona, in the beauty of its people, in the elegance of its squares, is alive in the exclusivity of its streets. Declared World Heritage by UNESCO for its urban structure, its architecture and its uninterrupted alternation of styles that have developed over two thousand years of history. For all these reasons Verona is definitely the city par excellence with timeless charm. A recognizable charm in the enchanting old town, full of narrow streets and steep alleys, crossed by an inexorable flow of people lost in its splendor.

You can not think of Verona if not as the tragic scenario of Romeo and Juliet’s love affair. The drama of Shakespeare has certainly made the fortune of the Venetian city: a good part of the city’s economy is based on this “romantic tourism”, which finds its worthy conclusion under the famous Juliet balcony.
Yet identifying Verona as the city of Romeo and Juliet has hidden other beauties of this city, not surprisingly called the “Porta d’Italia”, because it anticipates who comes from the north, the face, the beauty, the substance of our country. A concentration of artistic, historical and cultural testimonies immersed in the evocative atmosphere of alleys and squares completed by the flavors of traditional and territorial cuisine.

The Roman Amphitheater, better known as the “Arena”, is, together with Romeo and Juliet, the symbol that makes Verona famous all over the world and the first thing tourists choose to see as soon as they set foot in the city. Probably built around the first century, the Arena, like all the amphitheaters, hosted the shows of gladiators. It was the fourth amphitheater after the Colosseum of Rome, that of Capua and that of Milan with a solid and imposing structure with the exterior clad in brick and Veronese stone that create a sparkling chromatic effect. Inside, with the concentric movement of the steps, it inspires in the spectators a singular effect of majesty. It takes its name from the “sand”, the sand that is located in the central part where the shows took place. It could accommodate up to 30,000 spectators, leaving ample room for movement for those who performed. Great arena of important musical performances, the Arena continues to preserve its ancient function, even if with less bloody shows!

Verona is the theater where the tragic love affair of Romeo and Juliet has been consummated, rendered immortal by the pen of William Shakespeare. In a 13th-century building located in the historic center,the Veronese recognized the house of the Capulets: the legend is linked to reality, finding points of reference in it. A splendid brick-covered façade with a Gothic-style portal leads visitors inwards: in the courtyard is a bronze statue of Juliet and the famous balcony that saw the birth of love between the two young men. Juliet’s house is a must, even if very touristy, for those who want to discover the places that inspired the love story par excellence. Whether you believe the legend or not, it remains one of the things to see absolutely in Verona. Less fortunate is the House of Romeo, now a private residence, not far from the Arche Scaligere. On the gothic façade an inscription reads “Oh! Where is Romeo? … Be quiet, I have lost myself: I am not here and I am not Romeo, Romeo is elsewhere “(Act 1, Scene 1). The Tomb of Juliet is located in an ancient convent of Capuchin friars of the XIII century in Via del Pontiere, 35. It can be visited from Tuesday to Sunday from 8.30 to 19.30, from 13.30 to 19.30. Full ticket € 4.50.

Legend has it that during the flooding of the Adige in 589, the water stopped at the threshold of this Church built on the burial place of Bishop Zeno. San Zeno, of African origin, was the eighth bishop of Verona (about 362-380) and converted the city to Christianity. The Church of San Zeno Maggiore is one of the greatest examples of Romanesque architecture in Italy and the current appearance seems to date back to the 12th century. In addition to preserving the body of the saint, the Church is rich in sculptures and paintings from the twelfth to the sixteenth century, among these particular attention goes to the Pala di San Zeno by Andrea Mantegna, the first example of “sacred conversation” with the Madonna at the center with the Child. From the left we can recognize Saint Peter with the keys, Saint Paul with the sword, Saint John the Evangelist with the rosy dress, Saint Zeno in episcopal clothes, Saint Benedict with the monastic saison, Saint Lawrence with the grid, Saint Gregory the Great dressed as Pope and Saint John the Baptist with a typical hermit dress in the desert. One senses that it is a conversation because the direction and gestures give the impression that the saints are talking to each other.

A colorful market of fruit and vegetables with its array of umbrellas, surrounded by buildings and historical monuments is the main feature of Piazza delle Erbe: the oldest square in Verona, where the medieval buildings, slowly, have taken the place of those Romans. It is the place where you can best catch the most popular and lively side of the city, without renouncing the cultural aspect of your holiday. During the market, on Saturdays and Sundays, it is the city’s living room, where the Veronese meet for shopping or for the evening aperitif ritual. On the square are the Palazzo del Comune, the Torre dei Lamberti, the Casa dei Giudici and the Mazzanti houses. On the smaller side is the baroque Palazzo Maffei embellished with several statues of Greek gods: Jupiter, Hercules, Minerva, Venus, Mercury and Apollo. The Casa dei Mercanti (or Domus Mercatorum) is beautiful, where the Banca Popolare di Verona is located today. In the square there is the fountain called “Madonna Verona” that contends for attention with the Capitello, also called Tribuna and erroneously Berlina. It already existed in the XIII century, when under it the podestà were seated for the inauguration ceremony and or the magistrates before their settlement.

The river Adige crosses and cuts into two Verona: bridges, therefore, have always played an essential role for the city. Today there are 7 who shared the fate of having been destroyed by the retreating Nazis and then rebuilt in the following years. The oldest of all is the Stone Bridge, from the Roman era that still connects the Roman Theater with the city center. Fortunately, the stone blocks and bricks, projected into the river bed by the explosion, were recovered and used to rebuild the bridge in a very faithful way to the original. The other representative bridge is the Scaligero bridge, right in front of the Castelvecchio. Built in the second half of the fourteenth century with three unequal arches, it suffered the same fate as the Ponte di Pietra and as this was rebuilt in 1951 with the original stones and bricks recovered on the bottom of the Adige.

Be the first to review “Tour of Verona” Cancel reply