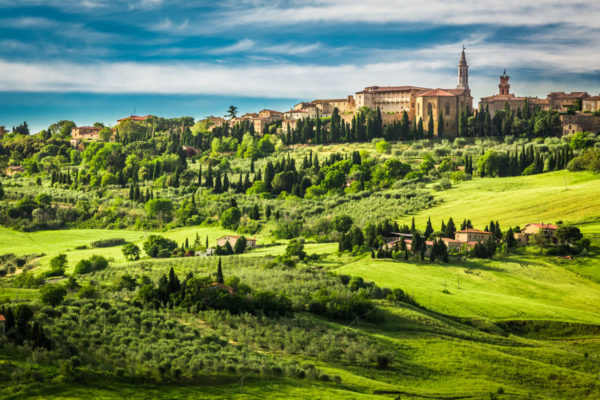 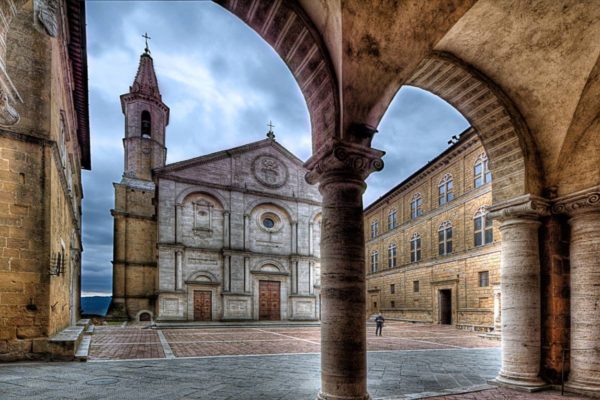 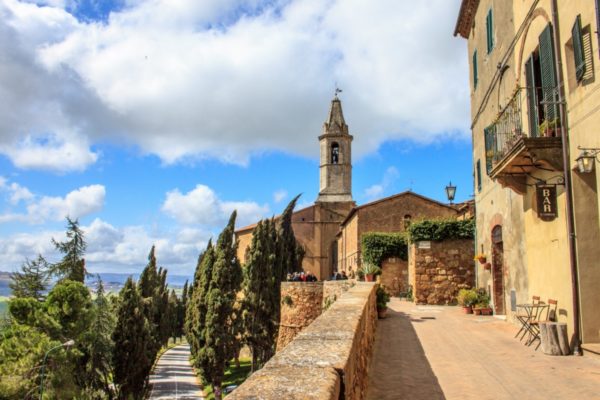 Today known all over the world for its beauty, Pienza has a fairly recent history. The town was in fact nothing but a small village called Corsignano until 1462 when Pope Pius II decided to rebuild the place that had given him birth. The history of Pienza is closely linked to that of Enea Silvio Piccolomini born in Pienza on October 18, 1405 and became Pope in 1458 with the name of Pius II. Great humanist Pius II wanted to turn his native Pienza (Corsignano) from a small medieval village (the ancient Castle of Corsignano is known since 828) in a papal residence in Renaissance style. The original project of 1459 designed and designed by Bernardo Gambarelli known as the Rossellino (a pupil of Leon Battista Alberti) today there are many fifteenth-century palaces along Corso Rossellino and Piazza Pio II (the heart of the town) overlooked by the Cathedral and the main buildings historians of Pienza. The works last a little over three years and on 29 August 1462 for the feast of St. John the Baptist Pius II consecrated the Cathedral and inaugurated the new city of Pienza. But Pius II and the Rossellino were able to enjoy their creature for a long time. Legates of a strange destiny died both in 1464, only two months apart from each other. The Pope in Ancona where he was about to embark on a crusade and the Rossellino while he was thinking of a new city. Since then, the city has had very few modifications and is almost the same as Rossellino designed it. In 1996 Pienza became part of UNESCO’s natural, artistic and cultural heritage, followed in 2004 by the same Val d’Orcia.

Pienza is an oasi of peace in the middle of the green of the Val d’Orcia, the ideal place to “recharge” with a days of vacation. All the surrounding landscape contributes; the gentle hills that follow each other without interruption, dotted here and there with sparse cypress trees, isolated villages that still preserve the Renaissance atmosphere, the suggestion of the sunset or the fog that covers everything leaving only the top of the hills to emerge. The historic center of Pienza is a real gem, so much so that it has been declared a UNESCO World Heritage Site. Let yourself be transported through these unique places by our driver on board our comfortable minivans and it will be a tour that will leave an indelible memory in your memories.

Corso Rossellini in Pienza It is the most important street of the village which is accessed from the door to the Prato which is located in the West. Along this road you can admire the Gothic church of S. Francesco, dating back to the late thirteenth century, where you can appreciate a table of the school of Duccio Boninsegna, the frescoes of the fourteenth and fifteenth centuries, a Madonna attributed to Luca Signorelli and paintings by Balducci and Lorenzetti. On the other side there is the Ammannati building, built, as well as other structures, during the general plan for upgrading the city territory wanted by Pius II. Here you can indulge in pleasant walks among the characteristic shops that will tempt you with their exquisite local gastronomic products, especially with pecorino, exclusive typical product of Pienza that will whet your palate.

Piazza Pio II This square, with its particular trapezoidal shape and its characteristic herringbone flooring, is the animated and animated center of Pienza. This square was built according to precise patterns, to satisfy the nascent humanist representations of the Renaissance society. Here the Cathedral, the Piccolomini palace and the Town Hall stand out. In front of the Piccolomini palace you will notice a wonderful well, executed on a project by Rossellino in 1462.

The Cathedral of Pienza: This structure, built in Renaissance style on the façade and with a Gothic style inside, was designed by Rossellino and is dedicated to the Assumption. The façade, made of travertine just like the bell tower, is subdivided by arches on columns and surmounted by a tympanum with the Piccolomini coat of arms. The interior, with its three naves of the same height, is inspired by the observations that Pius II, during his travels, dedicated to the German models of the hall churches. The “Domus vitrea” contains a whole series of masterpieces commissioned expressly by the Pope to the best painters of the period such as Giovanni di Paolo, Matteo di Giovanni, Vecchietta and Sano di Pietro.

The Diocesan Museum of Pienza: This Museum, formerly the Cathedral Museum, is currently arranged in a very suggestive way inside the bishop’s palace and in its rooms you can appreciate Flemish tapestries from the 15th-16th century, furnishings, jewelery, sacred vestments, a Crucifix by Segna di Bonaventura, the paintings of the Sienese school of Lorenzetti, Bartolo di Fredi, Frà Bartolomeo della Porta and Vecchietta, the famous Piviale di Pius II, an exclusive English work carefully crafted in gold filigree with more than 150 embroidered figures .

Palazzo Piccolomini: This majestic masterpiece is also due to Rossellino, with its three floors and mullioned windows. The real surprise of this building is enclosed inside because as a precious casket discloses to the eyes of the visitor beautiful works of art, antique furniture, special relics and a valuable library. But what will amaze you most is probably the hanging garden, which surrounds the building, which overlooks a large porch from which you can enjoy a beautiful view of the Val d’Orcia.

Palazzo Civico: This building, built by Rossellino, which closes the east side of the square, is perfectly in harmony with all the architecture that surrounds it: the spacious loggia on the ground floor contributes, with the angle of the other buildings, to expand the central space that would otherwise be restricted.

Be the first to review “Tour of Pienza” Cancel reply