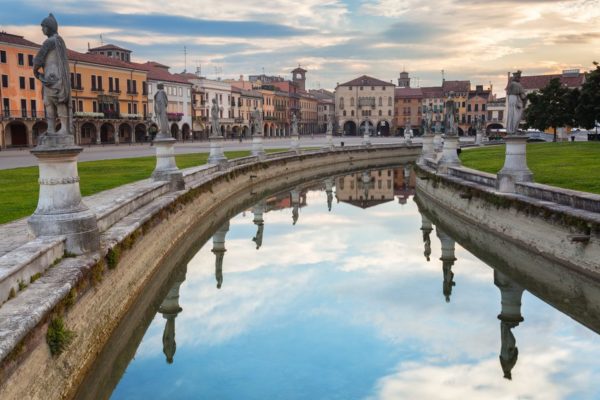 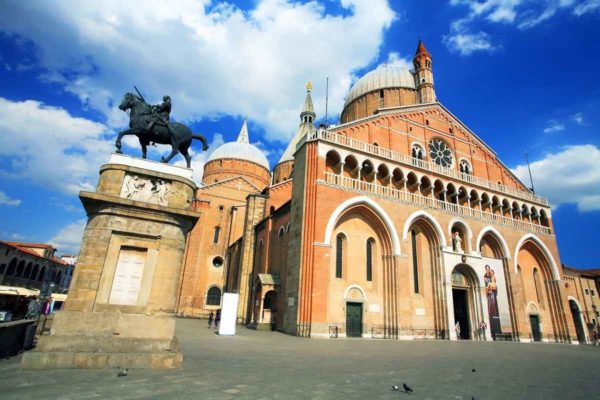 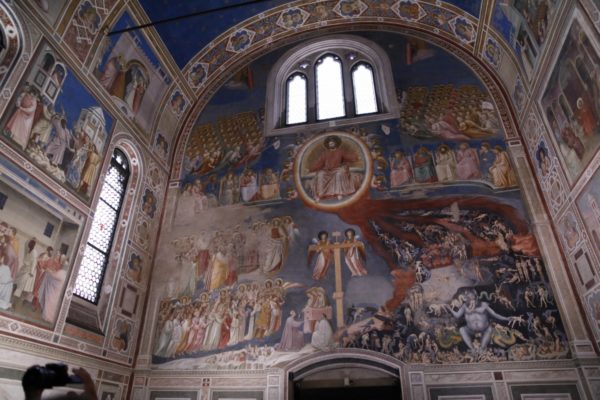 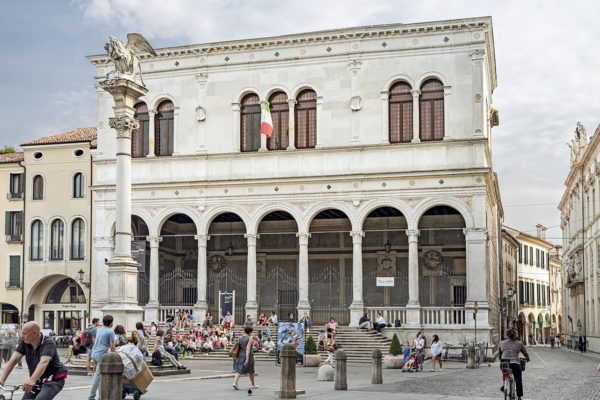 According to tradition, the origin of Padua is legendary and noble: it was in fact founded in 1185 BC from the mythological figure of Antenore, which climbed the Brenta in search of a new home after the escape from Troy and drove the Euganei from this area, relegating them to the south, close to the volcanic hills that still bear their name. The city comes into contact with Rome almost from the origins of this, holding a military alliance to face together the pressure of the Gauls, settled on the nearby Beriche hills, south of the current Vicenza. Subsequently, the increasingly frequent relations determine the Romanization of the city, which becomes municipium between 49 and 42 BC, probably in 45 BC with the Lex Julia Municipalis. In this period Padua was the third most important city, after Rome and Cadiz and became part of the X Regio that had as its capital Aquileia, which was connected thanks to the Via Annia (built in 731 BC) that left Adria. This ancient and important road allowed to connect with the Postumia, which crossed the Po Valley, arriving to Genoa and continued beyond Adria with the Annia Pompilia and the Flaminia that ended in Rome. The Paduan Renaissance is historically located a little earlier than the development and rebirth of the Lords of Central Italy, due to a series of historical events, but also for the cultural and artistic debate that the birth of the University and the presence in the city of some particularly innovative characters they manage to create. Giotto and De ‘Menabuoi, Pietro D’Abano, Petrarca, Marsilio, Donatello, Squarcione, Mantegna met from the fall of the Da Romano family until the first half of the 14th century. In the twelfth and thirteenth centuries Padua is definitely Guelph city: the bond with the Church and the Papacy are reflected in city life and allow the defeat of the Da Roman allies of the Emperors Federico Barbatossa first, Otto IV and Federico II then. But in the city there has also developed a new secular conscience favored by the growth of the new bourgeoisie that has freed itself from the feudal system introduced by the Lombards and claims spaces of power by subtracting them from the Lords, but also from the Bishops who have extensive properties within and outside the city. Also the presence of the free University contributes to the secularization of the city.
Here students of every confession and every nation are admitted and welcomed, favoring the intellectual exchange, but also the appreciation of universal values precisely because they are not linked to this or that spiritual practice. On horseback between the thirteenth and fourteenth centuries with Pietro D’Abano and Marsilio from Padua develops the so-called Paduan Aristotelianism, a philosophical current that opens knowledge to multidisciplinarity, but also promotes concepts such as the secular nature of the Government, peace as a supreme good and the authority of the Lord derived from the will of the community.These theories led to definition of heretics and the persecution by the Church of all those who embraced her, from the aforementioned Peter and Marsilius, up to Galileo. Around 1543 the first Garden of the Simple Worlds was founded, or the first Botanical Garden. The “simple” were the “simple” remedies, ie essential, derived from plants, the basis of pharmacology. Just to teach the “simple” together with “surgery and notomia”, was called in 1551 Gabriele Falloppio, who with his studies of anatomy described in addition to the tubes which gave the name, important parts of the eye and ear. The medical school of Padua became increasingly important internationally attracting students and professors from all over Europe. If Padua had not been in the Republic of Venice, many studies could not have been carried out, given that in large parts of Europe the anatomical sections of human bodies were considered a crime punishable by death. In the same year in which Fabrici d’Acquapendente published the first treatise of comparative embryology, the De forma foetu (1600), in Rome was burned at the stake as a heretic Giordano Bruno, who refused to abjure his ideas. The possibility of experimenting in the anatomical field will lead to the foundation of pathological anatomy by Morgagni at the end of the 18th century.

A journey between past and present, between millennial history, traditions and art: this is Padua. A city full of beauty, such as the restored Palazzo della Ragione and the Loggia dei Carraresi, evidence of the ancient splendor of the Lordship of the Carraresi; the Scrovegni Chapel with the precious cycle of Giotto’s frescoes; the sculptures of the Donatello or the most modern lines of the Libeskind monument. It is a journey through the magnificence of the ancient palaces, in the spirituality that is breathed in its Churches among all the Basilicas of S. Antonio, of S. Giustina, the Duomo with its Romanesque Baptistery among the daily swarming of the city markets of Piazza delle Grazie Herbs and Piazza della Frutta, between the grandeur of Prato della Valle and under the ancient porticoes. Padua is also the city of science that develops between the ancient walls of the university building of the Palazzo del Bo and along the avenues of the first university Botanical Garden of Europe.

“Venice the beautiful, and Padua his sister”, recites a popular saying. The comparison with Venice should already make you understand, to those who have never been in this city, what you will find during your visit.

A distracted visitor who passes in front of the building that houses the Scrovegni Chapel, could easily go straight thinking that there is nothing exceptional that is worth entering. In reality, that “simple construction” as Giotto himself defined it, hosts the most important cycle of frescoes in the world. Stupit yourself by admiring the starry sky under which the episodes of the life of Joachim and Anna, those of the life of Mary, take place. the episodes of the life and death of Christ. Amaze yourself a little more thinking that Giotto took only two years to complete it all. In 1303 he was commissioned by Enrico Scrovegni and in 1305 he had already finished. Henry wanted to build the Chapel in suffrage of the soul of his father, Reginaldo Scrovegni, who had many things to be forgiven. Banker and usurer, so famous and feared, to be placed by Dante in the hell of the Divine Comedy. With the Scrovegni Chapel, Giotto began the revolution of modern painting.

Paduan people call Sant’Antonio “Il Santo”, without adding the name. This shows not only the affection but also the importance for Padua of the Basilica that houses the relics of St. Anthony. The destination of a non-stop pilgrimage that reaches its climax with the procession on June 13th, the Basilica di Sant’Antonio also deserves a visit due to the presence of many masterpieces of Italian art. The first thing you notice is the coexistence of different styles due to the following interventions: the Romanesque façade, the gothic ambulatory with the seven chapels, the Byzantine domes and the Moorish bell towers. Inside, starting from the right, there is the Chapel of Gattamelata and that of San Giacomo frescoed in 1300 by Andriolo de Santi, one of the greatest Venetian architects and sculptors of the time. Immediately afterwards there is the Chapel of the Crucifixion and then the Sala del Capitolo, with a fragment of Crucifixion attributed to Giotto. The “Treasure of the Basilica” with the relics of the Saint is at the center of the Deambulatory. In many cases the intact language and chin of Saint Anthony are visible, a sign, according to the Church, of the recognition that God wanted to give to the untiring work of evangelization of the Saint. In the square in front of the basilica not to be missed The equestrian monument to Gattamelata, a bronze statue of Donatello, an authentic revolution in the history of art: it was the first large equestrian statue detached from other architectural elements.

Piazza delle Erbe, for centuries, is the place of Padua that has been appointed to the market. The names that followed to define this large space have always indicated the origin and the commercial function: “Piazza della Biada”, “Piazza Del Vino”, as well as the stairs of the imposing Palazzo Ragione were called “Scala delle Erbe” “Because the sellers of lettuce, onions, leeks, cabbages or” Scala del vino “or the” Scala dei lavorri Lavorati “were put there. In fact, even the names of the streets surrounding the square betray their commercial function: hosts, butchers, greengrocers, every corner had a specialization. Behind Piazza delle Erbe, divided by Palazzo della Ragione, there is the other commercial square of Padua: it is Piazza della Frutta. Also in this case the name betrays its origin and original function, even if now it hosts a market where almost exclusively clothes are sold. To note the Peronio, a medieval column whose name derives from the Latin perones, leather shoes that were sold here. The two squares are joined by the “Volto della Corda” or “Canton delle busie”, covered passage called so because here the liars, the bankrupt, the cheaters and the debtors were struck on the back with a rope. The strings always remained hanging from five stone rings fixed in the wall as a warning. The corner under the “Volto della Corda” takes the name of “Canton delle busie” (corner of lies) because here traders kept their negotiations. The white stones with the old Paduan measures are still visible today, a reference to prevent the sellers from cheating customers.

On Piazza delle Erbe it overlooks the most imposing building as well as the symbol of Padua: it is Palazzo della Ragione (1208 circa) over the centuries the seat of the Court, from which it takes its name. The Paduan people also call it “The Salon” because the first floor is actually a single hall-shaped environment, for many centuries the largest in the world, which is accessed from the “Scala delle Erbe” in Piazza delle Erbe. The interior of the building is astonishing: a single room 80 meters long and 27 wide, completely frescoed. It had to be even more beautiful when there were Giotto’s frescoes, destroyed during the fire of 1420. The pictorial cycle inside the palace is one of the largest in the world: there are zodiacal, astrological, religious, animal motifs that symbolize the activities of the city, at different times of the year and the intervention of the judges of the building to eliminate the issues.

Be the first to review “Tour of Padova” Cancel reply